The Law of Attraction: Learning to move up the 'Emotional Scale'

Once you understand the emotional scale* and your emotional set points, on any subject, you will be able to 'clean up' those areas of your life which aren't working for you. If you have no awareness of the inner dimensions of your reality, then it will be impossible.

Below you will see the emotional scale, as given by Abraham-Hicks: 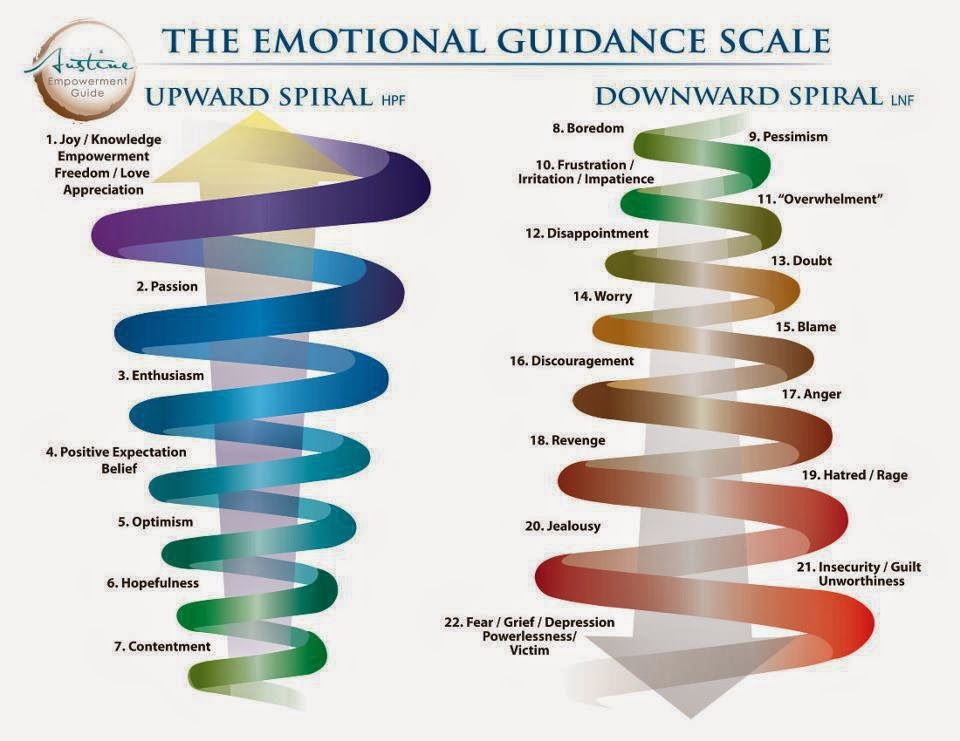 You will be somewhere on this scale (the words don't matter so much as the frequencies behind the words) when you focus on a particular area/topic of your life. The diagram shows the scale, split into an upward and downward spiral, but they are essentially one fluid scale.

The three major areas that come up again and again for all of us, are money, health and personal relationships...

One key thing to understand is that you can't jump from feeling grumpy, negative feelings to feeling suddenly positive and upbeat. These vibrations are too different in their frequencies.

Another vital, and similar key, is that you must incrementally reach for better feeling thoughts by focusing on 'wanted'. This is not usually easy for the beginner because they are very practiced in offering an 'unwanted' vibration, rather than a 'wanted' vibration. As with all skills, it takes time and patience, along with depth of understanding.

After covering the mechanics of moving up the emotional scale in class, my students were invited to go home and practice on an area that needed cleaning up.  One of my students decided to focus on the area of personal relationships, as she felt she was being spoken to disrespectfully by her boss (who we will call 'Ms X').

She felt that Mis X distrusted her and often spoke to her with animosity, which was clearly an 'unwanted' situation.

Contrasting, or unwanted situations, lead to clarity about we really want to bring into our lives. As my student focused on the unwanted situation, it was easy to identify the 'wanted' solution: my student wanted to be spoken to with love, respect and appreciation by her boss, Ms X.

Unfortunately, her initial attempt to move up the emotional scale was hampered by trying to jump vibrational ranges. She also tended to magnify her negative feelings by refocusing on the 'unwanted' aspects of the relationship:

1. It feels horrible when Ms X dumps this negativity on me (starting point, identifying where she was standing)
2. I feel really bad about myself when she treats me so poor! (student feeling worse, student magnifies the negative energy here)
3. I don’t understand why she has to be so awful and how she can think it’s okay to behave so poorly (feeling worse, blame energy)
4. Strangely, I think perhaps she doesn’t fully realise what she is doing (feeling better, student is shifting to acknowledge another perspective)
5. She operates in the world from a fear and lack perspective and this makes her panic (feeling slightly better than the previous statement; student trying to see why she might be behaving as she does. However, there is still some judgment here)
6. There is so much fear around her ability to communicate and this makes her communication very poor (student still spinning around in the 'mucky' vibration)
7. She is a woman in a man’s world (finance) and has a lot to prove (feeling worse, this may be true but it doesn't help my student's vibration)
8. But this doesn’t excuse her poor behaviour (feeling much worse, moving into blame energy again)
9. I know she can be kind (feeling improvement again, shift upwards by acknowledging the positive behaviour of Ms X)
10. She showed thoughtfulness and gave me flowers and a card for my birthday (feeling better, using a real life situation to transmute the energy)
11. When I spoke to her about  her communication at the end of last year she seemed to take on board the points I made about her communication (feeling better, student is acknowledging she is being listened to)
12. But then this happened again last week and I feel we are back at Square 1! (feeling a lot worse, student focuses stronlgy back on the negativity and blame)
13. But in the greater scheme I have had opportunity to stand up for myself on that occasion (feeling better, student is acknowledging her own power)
14. I have had opportunity to say what behaviour I will not accept (feeling better, student is owning her power, seeing the gift of the situation)
15. I have gotten very angry which is better than victim mode (feeling better, as this is a true statement, anger is better than powerlessness)
16. I am starting to believe that I deserved to be treated better than this (feeling about the same, no change)
17. That I am worthy of respect, love and kindness (feeling better)
18. I deserve to be treated well (feeling about the same as the last statement)

Overall, after the exercise in deliberate creation, my student felt there was some improvement in her vibration but the negative 'sticky' or 'muddy' energy was still there. Some of the energy had shifted but not all.

So, during class, we refocused on the 'wanted aspects' and I guided my student to maintain consistency in moving up the emotional scale.

We started from the beginning again, consciously and deliberately moving up the scale to consciously change her emotional 'set points' around this person/situation.  You can call these set points "emotional triggers".

1. It feels horrible when Ms X dumps her negativity on me (starting point)
2. Maybe she doesn’t realise what she’s doing? (feeling better, acknowledging awareness of the other person's perspective)
3. I have seen her be both kind and considerate (feeling better, we used a real life event as a touchstone)
4. She showed real thoughtfulness and gave me flowers and a card for my birthday – that was really nice! (feeling better, magnifying the energy of 'wanted')
5. I’ve realised that her negativity doesn’t have to affect me so much (feeling better, more empowering talk)
6. Only my reaction to her can pinch me off from my Source of Wellbeing (feeling better, acknowledgement of student's vibrational power, that she is in control of her emotions)
7. I know that as I only give my attention to her positive aspects, only positive aspects can be shown to me (feeling better, another statement of truth)
8. I know that X isn’t the monster I’ve made her out to be (feeling better, my student acknowledging her own role in this)
9. I know that I deserve to be treated well (student doing well here, acknowledging self-esteem)
10. I like knowing that I can stand up for myself in a peaceful way. (feeling better)
11. This is a chance for me to know and demonstrate Who I Really Am! (feeling much better now, empowerment)
12. I now allow myself to see the best in Ms X (feeling better, statement of clear intent)
13. As I change my point of attraction, I will only rendezvous with X when she is in a better-feeling place (feeling even better, statement of vibrational truth)
14. From this point of attraction, Ms X will begin to see and appreciate only the best in me (feeling very good here, understanding the nature of vibration, and how we attract certain experiences based on our vibration)
15. As I maintain my connection to Source, Ms X benefits from my expanded perspective (feeling better, plus acknowledging statement of spiritual truth)
16. I really do appreciate many qualities in my boss (I asked my student to list some here...)
17. I appreciate many aspects of the work I do (I suggested she try to list some… e.g. security, stability etc)
18. I realise that, for the most part, I am respected by my colleagues and my boss (student feeling very good, virtually all of the negative energy had shifted by now)
19. I also respect and honour them. (feeling happy... demonstrating compassion, tolerance and forgiveness)
20. I deserve to be treated well, and I AM. (student now fully aligned with her desire = feelings of love, freedom and empowerment)

In just a few statements, my student cleaned up her vibration around a situation that had been troubling her for months!!

Within just a few days of changing the energy around this situation, her boss dramatically changed her behaviour towards her. This is the 'magic' of cleaning up one's energy, and one's vibrational set points. This is THE SECRET, demonstrated.

Life is fluid, flexible... and ever changing. We are constantly changing but, if we keep unconsciously choosing the same reactive patterns, then nothing appears to change for us.

We can demand that others change - but really, it's up to us! When we change, everything else changes.

Even if it doesn't change in the way we would hope, then we find we are no longer affected by it.

**Sign up for the next Law of Attraction workshop on Saturday, 5th July, in London.
http://www.energytherapy.biz/courses/retreats.php#bookings
**Only £90 early bird (until end of May), else £110 for the day's training.
**12 students max, to create an intimate setting where individuals can receive quality attention from the teacher.
**Workshop runs from 10.30am to 6.30pm

Can't make the next workshop?  Sign up for Law of Attraction coaching with Jaime here:

Once you understand the emotional scale* and your emotional set points, on any subject, you will be able to 'clean up' those areas of your life which aren't working for you. If you have no awareness of the inner dimensions of your reality, then it will be impossible. - See more at: http://www.jaimetanna.com/2014/05/the-law-of-attraction-learning-to-move.html#sthash.pwFWMfpd.dpuf
http://www.energytherapy.biz/lawofattraction/

Jaime works with clients all over the world, and has served clients in the UK, Australia, Canada, USA, Germany, France, Spain, Italy and Brazil to name but a few countries.

Once you understand the emotional scale* and your emotional set points, on any subject, you will be able to 'clean up' those areas of your life which aren't working for you. If you have no awareness of the inner dimensions of your reality, then it will be impossible. - See more at: http://www.jaimetanna.com/2014/05/the-law-of-attraction-learning-to-move.html#sthash.pwFWMfpd.dpuf
Posted by Jaime Tanna at Saturday, May 17, 2014

I do belive in energy therapies & would really like to see results. Also know a master in rikie which offer mi a training course with certificate, I wish to attend one of James classroom in the future.