The War on Consciousness and the Rise of Ayahuasca

Take a few minutes to listen to this inspiring video titled "The War on Consciousness" by Graham Hancock.


If you are on a mobile device and can't see the embedded video, here's the link:
https://www.youtube.com/watch?feature=player_embedded&v=SHbkEs_hSec

This is a removed TED Talk since the very notion that humans might have consciousness was so offensive to the TED "high priests" that they felt the talk needed to be suppressed and removed it from circulation. Luckily, it is still active on YouTube (but for how long?).

In his talk (recorded earlier this year), Graham Hancock talks openly about the increasing use of Ayahuasca to help raise one's consciousness, highlighting a desperate need for mankind to wake up in the face of massive, self-destructive tendencies that are combining to threaten a world-wide ecological disaster of gargantuan proportions. We are honestly on a sinking ship, but our governments and those who wield the most power just want it to be "business as usual"!

Control, power and greed underpin the vast majority of the western world's business, economic and political activities. Even worse, the east is now copying the west's approach, diminishing its rich spiritual heritage.

Could the rise of individual consciousness be so threatening to the current paradigm, which only benefits the few (i.e. "the rich and powerful") while the majority suffer, that those in power would do anything they can to suppress it? The answer is a resounding "yes"!

Ayahuasca (if you haven't heard of it already) is a natural hallucinogenic that helps to elevate consciousness. 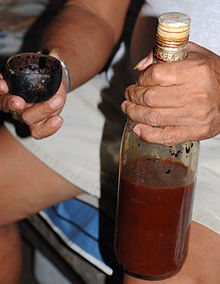 Peruvian shamans commonly mix the leaves of DMT (dimethyltryptamine) containing plants like Psychotria with the the Banisteriopsis caapi vine, which is a source of monoamine oxidase inhibitor (MAOI), allowing humans to drink the plant (rather than smoking it) in order to receive its potent effects.

The use of ayahuaca continues to remain illegal in many western countries, so it is interesting to note that many people are flocking to the Amazonian Jungle to try it for themselves. It is not something to be tried lightly, as it has severe physical, mental and emotional effects.

My friend, and astrologer, Mark Flaherty's world turned upside down when he was diagnosed with an "incurable illness", but a voice within insisted that the answer lay with ayahuasca—a sacred, visionary plant medicine.

Mark left his home, here in England, to live among the shamans of the Peruvian Amazon, and participated in hundreds of ayahuasca ceremonies.

His book "Shedding the layers" is a truly captivating true story of his fight to heal himself through unorthodox means, and a demonstration of faith in a healing power that shapes, yet transcends, the human experience.

The purpose and intent of the ayahuasca brew typically brings about an ascension in consciousness.

DMT naturally occurs in humans in trace amounts , where it functions as a neurotransmitter - but it has been deemed "illegal" by "those in power"!

Don't you find it extremely interesting that a drug that helps people connect with their inner spirit (or spiritual self), and thus ascend in consciousness, is clamped down very hard upon by a hypocritical "authority"?

This same authority (our governments) actively encourage the use of other drugs, such as alcohol, which typically bring about a sharp devolution in consciousness (just go to any pub or bar on a weekend!) as people indulge in "boozing benders" to escape their long working week, and jobs they typically hate!

This behaviour, of course, keeps them exactly where the government wants them to be - nursing their hangovers, and not questioning their day-to-day reality! The bigger questions of life are simply avoided entirely: "Who am I?", "Why are we here?", "What is the purpose of life?" and so on...

Of course, the government gets a nice fax tax, and it pretends that it's doing a good job for society by "cleaning up all those drunk bums" on the street, and tackling alcohol-fuelled crime and anti-social behaviour caused by drinking copious amounts of legally provided alcohol.

Oh, did I forget to mention all the advertising that is allowed to make drinking look cool, since the government continually receives nice, fat paychecks from the pro-alcohol lobbyists!

Society, apparently, also needs anti-depressants and other drugs created by Big Pharma to save itself from its own self-destruction - typically created by an ever increasing sense of isolation and disconnection - but doesn't need ayahuasca.

Did I forget to mention the incredible amount of money that our governments receive from the leading pharmaceutical companies to ensure their products reach the market as "safe" and "effective"?

Did you know that people who routinely drink lots of alcohol (which is highly toxic to the brain and body), and then drink lots of caffeine to "wake themselves up" after a night out,  will eventually become severely dehydrated and often suffer from depression, not to mention other ill effects of long-term "social drug" abuse. Just go to any hospital and see for yourself!

Eventually, our "social" habits do catch up with us!

Of course, Big Pharma kindly supplies all the hospitals with its radical new drugs to take care of you, once your body fails. Who's constantly getting richer from other people's misery? Drugs for life, anyone?

God help us all if we don't all wake up soon! Let's help each other - the truth is out!