Embracing the death of Nelson Mandela 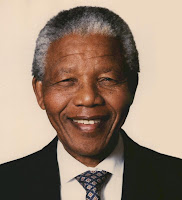 In The Times yesterday, the headline "End nears for Mandela" caught my eye. The subtitle said it all, "Nelson Mandela, 94, has become critically ill after 16 days in hospital."

Reading on further, it made me chuckle when I read that the seven doctors travelling with Mandela were "in full control of the situation". How preposterous!

When the life energy withdraws from the physical expression, doctors are anything but in control. What can they do? The Soul energy has chosen to withdraw, to die... to Dissipate Identifying Energies.

In human terms,we enter at "conception" or "birth", move along an imaginary timeline, and then experience "death". This all seems very real to us, and so it should be, else the purpose of the Grand Illusion would be lost! However, as we grow in consciousness, we realise that this timeline is linear, so life and death exist because of it.

Spirit moves in a circle... Is a circle... And we are part of Spirit. As part of that consciousness and energy, we are not bound to the linear timeline of decay and death.

For those who have forgotten the Soul's journey, who think that this life is all there is, Mandela's death will be a tragedy. It will be a great loss.

For those who have remembered the Soul's journey, his passing over will be a triumph. It will be a celebration!

Nelson Mandela has certainly accomplished his Soul's purpose, rising to the challenge of being here on Earth, and even surpassing his own expectations of what was possible. Only a Great Soul could have chosen such a path, demonstrating forgiveness and compassion so consistently, that the Giant Wall of Indifference and Separation ("Apartheid") came tumbling down.

Now it is time to let him go, with gratitude for all he has done for us.