Scheduled for surgery? You might want to read this! 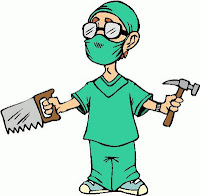 Despite the overwhelming evidence that the subconscious mind records vast amounts of sensory data, way beyond the conscious mind's ability to assimilate it all, and the fact that this data is fully accessible and retrievable through hypnosis, many surgeons are still unaware of the potentially harmful effects of negative remarks made in the operating theatre, whilst the patient is sedated.

Just because the conscious mind is 'asleep', doesn't mean there isn't an effect on the consciousness of the person being operated on!

There is a great need for our surgeons to be especially mindful of their thoughts and emotions, especially when the patient being treated is open to suggestion. Yet how many are?  In an world where materialism appears to rule, not enough respect is given to the emotional impact of negative words on the patient's psyche.

Post-hypnotic suggestions can soothe or traumatise a patient recovering from surgery, and influence how that person recovers, or whether they recover at all.

Here is an excerpt from the best-selling book, 'Many Lives, Many Masters' by Dr Brian Weiss, first published back in 1994.

"'About the anesthesia. When they give you anesthesia, can you hear? You CAN hear!' She had answered her own question...

'Your mind is very much aware of what's going on. They were talking about my choking, about the possibility of me choking when they did the surgery on my throat.'

I remembered Catherine's vocal cord surgery, which was performed just a few months before her first appointment with me. She had been anxious prior to the surgery, but she was absolutely terrified upon awakening in the recovery room. It had taken the nursing staff hours to calm her. Now it appeared that what was said by the surgeons during the operation, during the time she was under deep anesthesia, had precipitated her terror.

My mind flipped back to medical school and my surgery rotation. I remembered the casual conversations during operations, while the patients were anesthetized. I remembered the jokes, the cursing, the arguments, and the surgeons' temper tantrums.

What had the patients heard, at a subconscious level? How much registered to affect their thoughts and emotions, their fears and anxieties, after they awakened?

Was the postoperative course, the patient’s very recovery from the surgery, influenced positively or negatively by the remarks made during the operation?

Had anyone died because of negative expectations overheard during surgery? Had they, feeling hopeless, just given up?"

The physical part of our experience is only a small part of our everyday lives - by far, the greater portion is the emotional, mental and spiritual aspects of our lives.

The next time you, or a loved one, are scheduled to have surgery, ask your surgeon to mind their language! If they don't understand, print out this article, and give them a copy!

Jaime Tanna
Founder and Director of Energy Therapy
Posted by Jaime Tanna at Monday, May 13, 2013