Awakening to our true identity and place in the Universe

This universe, as many of us are beginning to realise, is infinitely vast and complex and this life that we see is but a reflection of a much grander, vaster truth. God's infinite universe is filled with life and it is the height of egoism to think that humans are the only life form to exist or be self-aware. I have verfied the information I present to you here through working with my High Self and I believe that it is completely accurate.

Virtually every year across the world we are blessed with the formation of Crop Circles - a term used to describe complex geometric shapes, often circular, that have been "made" by the flattening of crops such as wheat, barley, rapeseed (also called "canola"), rye, corn, linseed and soy.

These astounding patterns have been largely dismissed by the media as fake but when you consider the evidence, it is obvious that these shapes could not have been created by mankind at its present level of consciousness, using its comparatively limited technology.

Wherever the crop circles are made, the stalks are gently bent horizontally, often with multi-level layering; the plants are not broken and continue to grow until harvested by the farmer. The plant and soil samples have been analysed in laboratories showing they are affected at the cellular level. 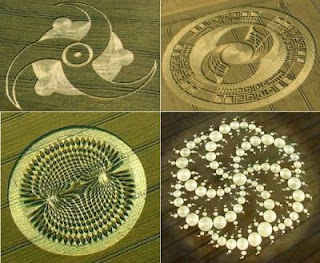 The hoaxes that were focused upon by our media actually insult the integrity of this incredibly intricate work, which is a major blessing from a highly advanced alien race called the Arcturians. My High Self assures me these patterns have been created each year across our entire planet for thousands of years - we have only just discovered them relatively recently.

The Arcturians believe that we all came from the same source and that we were all created in light. Seeing us as younger brothers and sisters, they seek to lift our consciousness and help humanity liberate itself from a course of self-destruction which is being instigated by darker forces at hand.

But much more than simply conveying a message of hope, the Arcturians are Masters of Frequency creating these powerful Sacred Geometric Shapes at key points on the World Grid to help restore balance to our sacred planet.

One aspect that unites all the crop circles across the world is that they occur in the vicinity of sites our ancestors considered sacred. Although these locations are known and watched during the summer months, no one has seen a crop circle in the process of forming. Usually there is a flash of light and the crop circle appears moments afterwards.

Our governments are very aware of the presence of extraterrestials, and their messages for humanity. So you wonder why more of this type of information doesn't come out in the press and on TV? Unfortunately, for many years, members of the dark forces have been acting insidiously; they have infiltrated key positions of wealth and power and own our networks. So, when such information has come out in the past, they have gone into action to stifle it or discredit it completely.

There was a great sense of awakening at the beginning of the 20th century and this was cut short by the short-sighted egotism of the few. We are now at that point again and it is time to open our eyes to the infinite possibilites and really demand to know what is out there.

For those of you who want to know more about Extraterrestrial Life and Sacred Geometry, I highly recommend reading "Hidden Mysteries" by Joshua David Stone and "The Ancient Secret of the Flower of Life" by Drunvalo Melchizedek.